Today is Bubble Wrap Day! I could not be more jazzed about this. Bubble wrap is THE greatest form of wrapping entity. Everyone gets that look in their eye when the potential of a bubble wrap popping experience is at hand. You know the look I’m talking about. There are several reasons for this phenomenon. 1) Everyone loves making insane amounts of noise. 2) Everyone loves pushing a button. 3) Popping that bubble is so final. It’s a high we just can’t resist.

So on this fine day of bubble wrapped goodness, I went to FedEx. I bought 50 feet of bubble wrap. I told the FedEx man about my blog and why I was purchasing bubble wrap. He seemed enthused. I wished him a Happy Bubble Wrap Day and headed home.

Also, today in Norman, Oklahoma, USA, there is a snowpocalypse. A snowmageddon, if you will. Basically everyone is preparing to be snowed in for about three days. It’s going to be insane. I’m going to be stir crazy. With that being said, today I was running a bajillion errands to get ready for the next several days. I went to the grocery store. Got the stuff to make chicken chili (thank you Geoff for the idea, thank you Charlene for the recipe).

I’m prepared for a Y2K experience of sorts. (remember how crazy people got about Y2K, what a midnight let down am I right?)

Anywho, due to my errand running and life organization today, I knew my celebration would have to take place later, hence the lateness of this blog. I got home and started cutting squares of bubble wrap.  I cut probably half the roll. That is 25 feet. Good job. I took those squares and shared it with the girls in my sorority. They all were ultra jazzed to get a square of bubble wrap and have their picture taken. At least that’s what I told myself. So here they are. Being jazzed. 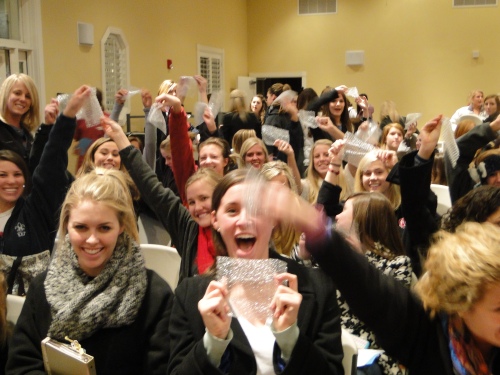 So pleased with their bubble wrap gift!

This is Kathleen. She got creative.

After all of that bubble wrap glory, I came home and remembered that I had another half a roll of bubble wrap! What to do with the this glorious roll of padded funness? Make a bubble wrap outfit seemed fitting. So I got to work. This is the result of my endeavor. I’m applying to Project Runway next week. Also, the outfit that I am wearing underneath my bubble wrap cocktail dress is what I like to call my ‘snowpocalypse uniform’. 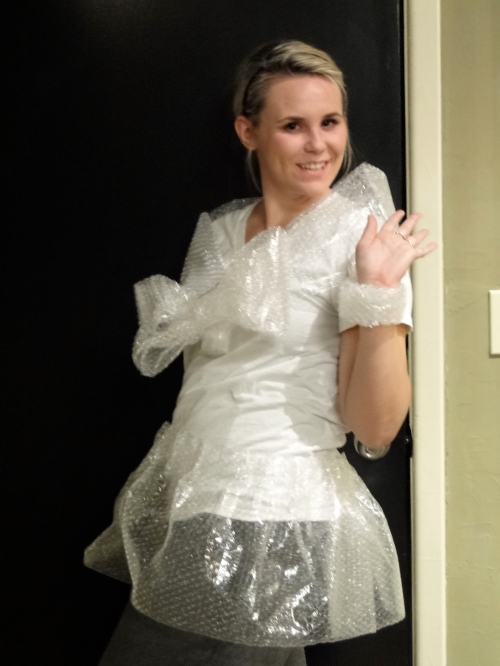 Bubble wrap is the fanciest of all textiles. 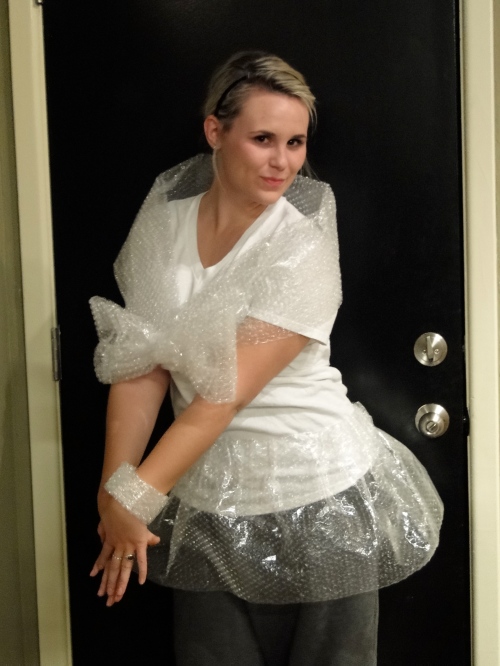 And I am the fanciest of all bubble wrap models. 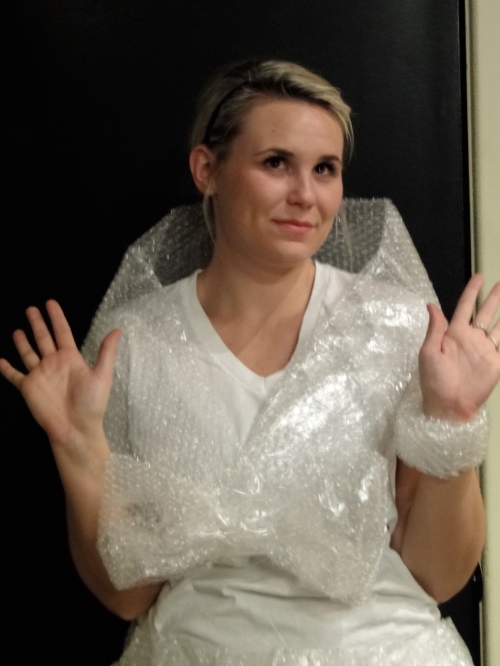 This is one hour into the snowpocalypse.... prepare yourselves for the next 3 days...

After I finished being a fashion designer, I remembered that I am going to a Lady Gaga concert in April. A costume would be a fairly fitting thing to wear to her concert so I did a redesign of my outfit. I don’t think you’ll be disappointed.

Apparently when you pretend to be Lady Gaga you don’t smile. Smiling is overrated when you are a scary pop star, just in case you were wondering.

This bubble wrap scarf seems like it would be less in the way of other people watching the concert.

Apparently you do smile. I was wrong.

Bubble wrap day was clearly a success. Also, fun fact: bubble wrap was initially designed to be wallpaper. I just envision someone trying to reach to the top of the wall to pop all of those bubbles and then I laugh.

This is also the last blog of January. I have successfully blogged one entire month. I am 1/12 of the way finished. I have a lot of exciting ideas and plans for the next several months. And I can’t wait to share them with you. I am proud of myself for finishing the first month. I feel like it is a mini accomplishment. Thanks for hanging out with me and putting up with one months worth of antics. Check out the This Month’s Celebrations section to read about the next month!

Well it’s Inane Answering Machine Message Day. And what exactly does that mean? Good thing you asked. It means that you get rid of those ridiculous answering machine messages that you think are so great. Newsflash Hansel, they aren’t. I fall for that insanity almost every time. I get so agitated when I fall for that seemingly innocent “Hey!”. I don’t like it. I don’t like it one bit.

Several of you reading this I KNOW have one. I’ve fallen for it and then cursed you when I realized what happened. But there was a time in my life when I had a ridiculous message. It was near the time when I first got a cellular device of my own. If any of you are Seinfeld fans, which I’m sure every single one of you is, you will know exactly what I’m talking about and how hilarious I am/was as a new cell phone user.

There is an episode of Seinfeld where George Costanza, my most favorite bald man of all time, records his answering machine message. It is no regular message. It’s a song. And it goes a little something like this.. hit it.

“Believe it or not, George isn’t at home. Please leave a message, at the beep. I must be out or I’d pick up the phone. Where could I be? Believe it or not I’m not home!”

So as a young child I recorded on my phone a message. “Believe it or not, Kate isn’t at home. Please leave a message, at the beep. I must be out of I’d pick up the phone. Where could I be? Believe it or not I’m not home!”

I’m not proud of the this. Ok, well I am a little. I love George Constanza. But I’m not proud of having an annoying message. I’m sorry to those of you that called me during the period in my life when this message was part of my media existence.

Last night in honor of Inane Answering Machine Message Day Eve, Chelsie changed her voicemail to something outrageous that made people start talking to the message, rookie cell phone user move. But she changed it back after we had a good laugh about how annoying those things are.

Another form of celebration today was answering the phone in a hilarious manner. Clearly the greatest of all greetings is “Buddy the Elf, what’s your favorite color?” I answered the phone that way today. It was satisfying. And I have one last phone story.

Last semester, my friend Tri thought it would be hilarious if he had a personal assistant. I joked that I would absolutely do that if I got paid. So the next day he forwarded his calls to my number. It’s not hard to do apparently. And you don’t have to have the permission of the number you are forwarding to. I got some hilarious phone calls. Especially because I didn’t know that Tri had forwarded his stuff. After I figured out what had happened I answered my phone, “Hello, Mr. Noensie’s assistant. How can I help you?” It was fun for about one singular day.

So there’s that. If you have one of these messages get rid of it immediately. If you don’t have one, I applaud you.

PS: My friend Matt let me know earlier today that it was draw a dinosaur day! I drew this little guy. Enjoy!

He is standing on a cliff looking at a river with a volcano in the background.

It’s Thomas Paine day. He is my most favorite historical figure of all time. I LOVE him. I own Common Sense. I have read Common Sense. I love common sense and Common Sense. When I am asked the question who would you invite to a dinner party and why I ALWAYS respond Thomas Paine. I think he would be the most fun of all. Everyone would go around and say their accomplishments and then T-Paine would say, “Oh those are cool. Yeah, I spurred on the Colonies to become the United States…so… yeah.”  Other guests on the list would be, Ferris Bueller, John Mayer, Leonardo da Vinci. There are others, but those are the only ones I could think of off the top of my brain.

I love that he was so revolutionary in his thinking. And that he was a really great writer. And that he was the original T-Paine. Fun fact: Thomas Paine signed his name T. Paine. I would love for T-Pain and T-Paine to meet. I don’t know that they would be the best of friends. But maybe, you never know. Maybe they both like gardening or something.

T-Paine. Known for being revolutionary.

T-Pain. Known for his robot-like vocals.

After looking up some interesting things on Thomas Paine, I found out that he was buried on his farm in New York. But some dude thought he needed to be buried back in England. He dug up his bones and decided to take them to England. But his bones never got buried. And now they don’t know where they are. It’s a mystery. Just your regular old case of missing human remains.

Here are some T-Paine quotes that I like from Common Sense:

This new world hath been the asylum for the persecuted lovers of civil and religious liberty from every part of Europe. Hither have they fled, not from the tender embraces of the mother, but from the cruelty of the monster; and it is so far true of England, that the same tyranny which drove the first emigrants from home, pursues their descendants still.

We have it in our power to begin the world over again.

It gives you the classic T-Pain sound. I mean, it makes you sound awesome. If you ever want to sound good while you’re singing — you’re going to need this.

I’m a really tech-savvy guy, so I know a lot about technology.

I wish there was a Schoolhouse Rock about The Celebrationist. It would be so great and hilarious. I would love it.

SIDENOTE: I have to tell you an outrageous story. Last week, when that huge mafia bust happened and a bajillion gangsters got arrested, one of the papers was talking about how many of them had hilarious nicknames. And then it listed some of the nicknames. Tony Bagels. One of the mafia members was named Tony Bagels. I died. Tony Bagels. This scene played in my head:

And now, back to Thomas Paine.

At dinner Chelsie made Thomas Paine a cheerleading poster, like the ones she used to make in high school.

I wanted to combine Both T-Pain(e)s. So I did. Prepare yourself.

That is me reading the last paragraph of the introduction to Common Sense. It’s very awkward. I apologize. I do these things for you. I wish there were some beats in the background of my Common Sense autotuned reading. I hope you enjoyed Thomas Paine day. And I hope that you enjoyed me read/sing/rapping Common Sense.