The mystery celebration for the day has been revealed. It’s Tooth Fairy Day! I surprised my dad and celebrated tooth fairies at his office. I’ll post about it later on tonight!

Don’t have any more teeth to lose.

Today, I had three celebrations listed. Rare Disease Day. Floral Design Day. And a Mystery Celebration Day. The mystery celebration is Tooth Fairy Day. And as you all know my dad is obsessed with my blog, in the best way possible. So I surprised him and came to Bartlesville to celebrate.

He was nothing less than jazzed when I showed up today. His office staff was really jazzed and I was jazzed. Everyone was jazzed. It was the best possible way to celebrate. It was a celebration to the fullest extent.

Let me preface my celebration with a story of losing my first tooth. I lived in Edmond. It was Halloween. I was going to be some variation of a princess. I was a princess every year for a really long time. Also, I was notorious for not pulling my teeth out. I would let them hang on for ages. AGES. They would spin the wrong way. It was a bad situation.

Well, on this particular Halloween night my dad decided that my tooth needed to come out. I, as a six year old, completely trusted my father. He told me, “Kate, I’m just going to touch  your tooth to see how loose it is. I’m not going to pull it out.” Clearly, I trusted what the man said. Clearly, I was wrong. He pulled my small tooth straight out of my mouth. And I was not pleased. I remember sitting there and pondering how my dad had lost my trust FOREVER. That was it. One tooth gone and I was done with trust. I eventually got over it. Because I realized that I was going to be a toothless princess.

Princesses are NOT toothless. And I wanted to be really convincing. I had every right in the world to be concerned. I looked like this post tooth removal.

So with that being said, my dad made up for his deceit. He told me how he knew the Tooth Fairy. I had never even thought of this. He was in dental school. How could he NOT know the Tooth Fairy? She practically runs that place! So he called her. He knew her number. I was thrilled.

He told her he had a really special tooth and that she really needed to take good care of this tooth. I was in awe. This was the greatest news ever. I ended up getting double the tooth fairy payout, which ruled as a six year old. And now I love the Tooth Fairy more than most people.

So when I was at my dad’s office today, I was looking for some really good Tooth Fairy stuff. And you better believe I found it. There are books in the waiting room for kids and that’s where I started my research.

This is what I found first. A book about what the fairies do with all those teeth. A valid question. There were some strange options. Making them into saws, grinding them into fairy dust, making them into jewelry. Things were weird. 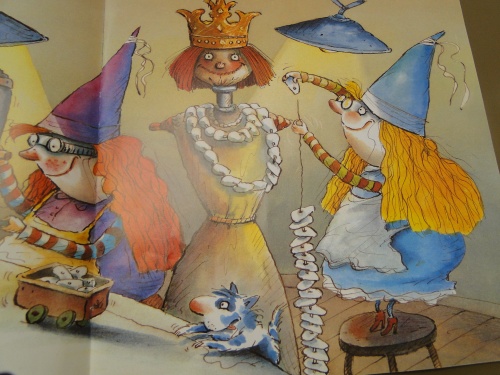 There was Franklin the Turtle book. Franklin is awesome and hilarious and wanted to lose a tooth. His friend Bear lost a tooth and Bear let Franklin borrow his tooth to put under his pillow. The Tooth Fairy got wise to the situation.

The Tooth Fairy is the wittiest of fairies.

Then there was a Little Critter book.

There was a book about animals without teeth and it made me laugh a lot. 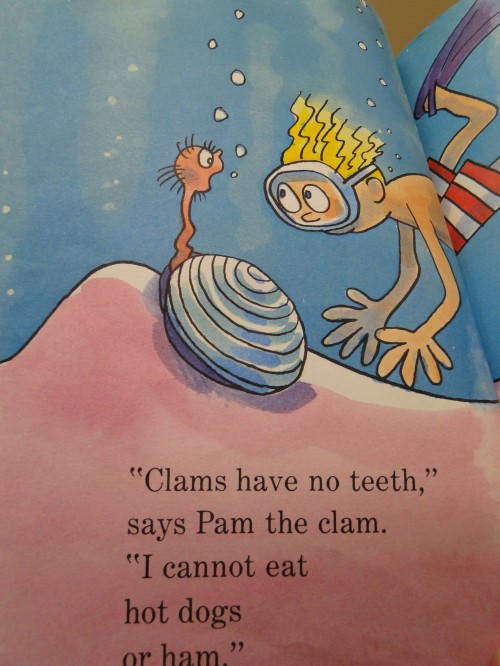 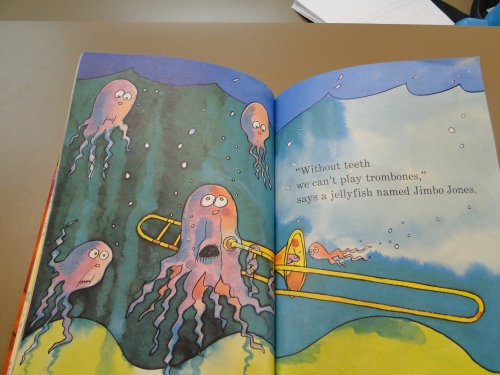 Clearly I was loving Tooth Fairy Day. My dad also showed me cool stuff in the toy box.

He loves his job.

I had so so much fun celebrating the day. I completely neglected Rare Disease Day and Floral Design Day, but I’ll have you know that I am a fantastic floral arranger and I don’t have any rare diseases.

Looking for turtle teeth on Ebay.

PS: I update the This Month’s Celebrations page. Check it out for March’s celebrations!

I have a really hard time not capitalizing on the fact that bear is so close to beard. But to be completely honest, I accidentally typed beard in the title of this post. I guess I was so used to typing beard instead of bear I confused myself. Anywho, I left it because I thought polar beards sounded way funnier.

I drove back from Waco today. I’m tired. We had a great time in the car. Shane made us do more mad libs. I think we are singlehandedly bringing back mad libs. Not that they were ever really gone. Sexy wasn’t ever really gone either, but Justin Timberlake brought that back.

But here is the issue, I don’t live on the LOST island. Polar bears aren’t roaming free. So I don’t have a lot of access to the creatures. I did however see the Baylor bears on campus this weekend. They weren’t polar bears but bears are bears. A cousin of the polar bear perhaps.

But I do have access to polar Beards. I’m fairly certain this is what wild polar Beards look like.

My dad and I are North Pole land surveyors.

My mom and Tom Beard are really good scientists.

Catching the Polar Beards in their natural environment is tricky. But I wanted to share with you the natural beauty and rarity found at the North Pole. Polar Beards are nearly extinct. They have been known to migrate to Oklahoma for the majority of the year. They are known for their extreme wit and general wawesomeness.

PS: I did my very first Celebrationist interview today. I was sufficiently awkward.

PPS: This is an update. It’s now 12:18 a.m. February 28th. I forgot to tell you of my dad’s outrageous texts messages concerning Polar Bear Day. Enjoy….

Tomorrow, if, for some outlandish reason, you have to snag a polar bear pelt…carve me a small patch for fly tying…the hairs are hollow and float flys really well…

Dear dad, you are the funniest of all dads. Love, Kate

Dear Kate…I’ll meet you at the OKC Zoo… you bring the scissors and the swimsuit…I’ll create a diversion at the monkey house…Love, Dad

You are out of control

Once Upon a Time.

Today is Tell a Fairy Tale Day. And I am still in Waco. I was sitting here and decided that a fairy tale mad lib was the greatest way to celebrate. If you grew up in a cave and don’t know what a mad lib is, I’m sorry for you. It’s when you get a list of parts of speech and you fill it in with hilarious things and then it creates a story for you. I found a couple of fairy tale themed mad libs and let the people I’m with give me all the suggestions. Let me preface these mad libs with the fact that 5 college aged boys were giving the suggestions.

5 boys. They have limited filters. They didn’t try to make mad lib #1 scandalous, but it happened. I had great reservations about including this based on the fact that I think my grandmother reads this, but this is how the celebration happened. And I don’t want to lie to you. I’m not into lying. Here are a few things that happened tonight that influenced a few of the choices, we watched Space Jam and we had enchiladas for dinner.

I am sorry for the content of this mad lib. The goal was to get the puma to eat the meat. That didn’t happen and I’m sorry. Also, thrust was NOT, I repeat NOT, my choice of word. Please I beg of you, forgive me.

Once upon a rainbow, there lived a spectacular girl called “Little Red flaky Hood”.  Little Red flaky Hood just loved to thrust in the forest.
One day, her step-daughter called to her and said, “Little Red flaky hood, would you please bring this basket of eggs to your vigorous grandmother in the woods?”
Little Red flaky Hood started off down the meadow, but on the way she met a big bad broom.  “Where are you going?” the broom asked her.  “Oh,” she replied, “I am going to bring these eggs to my grandmother, so that she will become less vigorous!”
The broom quickly ran down the meadow to grandma’s house, and when he got there he sang her in one gulp!  He quickly put on her bra  and got in the ants.
When Little Red flaky Hood walked in, she was pensive to see the broom in grandma’s ants.  “Why grandma!” she said.  “What big goblins you have!”  “The better to destroyed you with, my dear!” he yelled, and jumped out of the ants.
Luckily, at that very moment a handsome puma happened to be walking along the meadow and heard Little Red flaky Hood fighting with the broom. He frolicked the door down, then smacked the broom with his own meat.  The broom begged for mercy and ran away.  Then Little red flaky hood and the puma shared some eggs, and lived quickly ever after.

The second mad lib is much less scandalous. Mainly due to the fact that I told the boys not to pick scandalous things.

Once upon a Richard Nixon in the kingdom of Moron Mountain, there lived a harsh adventurer named Kate . The kingdom of Moron Mountain was a peaceful kingdom, where the bobcats roamed free and the enchiladas were plentiful. Ruling over the kingdom was yellow King Nicklaus, who became king when he pulled the magical purse from its place in the cowboy. Everyone was outrageous in Moron Mountain, until one day when the supple villain named Kim Jong Il snuck into Nicklaus’ castle and stole the sacred purse. King Nicklaus was instantly smashed from his throne, and he wandered the countryside for 9 days not knowing what to amplify. Finally, he met Kate , and explained the pragmatic situation. Kate told Nicklaus not to worry, and set off to recover the magical purse. Kate found Kim Jong Il at the castle, laughing brightly as his ferocious bald eagle guarded the magical purse. Kate thought for a moment, then exclaimed, ‘Oy Vey!!!! It’s a gigantic cow!’ And while Kim Jong Il and the gigantic bald eagle were looking away, Kate grabbed the purse and raced back to King Nicklaus. Nicklaus was so grateful that he gave Kate a solid gold earwax. And Kim Jong Il was given a 74-minute time-out. The end.

I hope you enjoyed those fairy tales. Please don’t read them to your children. Ever. I’m sorry for the scandalous nature of this post.

Tagged as celebration, fairy tales, mad lib, once upon a time, postaday2011