It’s Harry Potter’s birthday. I’m moving into my new apartment and it’s just wonderful. I don’t have much to update. We are trying to get as much done as possible before tomorrow. I love you dearly. Please watch a Harry Potter movie immediately in honor of his birthday.

I live in Chicago now.

Comedy Day is going to be an adventure for both of us. I’m in a Uhaul with my parents and I’m going to blog all day long. I’ll be updating periodically across our trek. I am not even out of the Bartlesville city limits and I have already thought of how badly I want an Ambien.

There are a few things you should know about my family traveling. My dad has the unique ability to purchase the most heinous smelling snacks from gas stations. He’s been known to consume hot dogs that have been rolling on that cooker since the dawn of time and pickles that come in a bag floating in their own juices. I made is as clear as I could today when I was purchasing Combos that if he tried to buy processed meats from a gas station I would physically harm him.

My mom and I thought it would have been hilarious if we would have taken an Ambien and not told my dad. We would have dozed off for the entire day, which isn’t far from what I’ll probably do at some point.

So, please keep checking in today for various updates and hilarious things that happen. I’m sitting on a tiny little jump seat, so things are already awesome.

Well for the last hour we have listened to Aziz Ansari’s stand up album. Which is quite fitting with Comedy Day. I’ve also opened the Combos. My knees are starting to ache a small amount. Things are looking good.

Sonic forest, I totally get you now.

We made it to Springfield, MO. My body is starting to ache. The jump seat is really taking a toll. My pain is also partly due to the fact that my neck wobbles when I try to sleep.

Here’s an interesting fact about Uhaul trucks, the floor gets scalding hot. It melted a peach ring into a peach puddle. Remember when you were a kid and you played ‘The Ground is Lava’ in your living room? Well, the ground here is really lava.

I love to solve little metal puzzles. Like the ones that have two nails twisted together and you have to get them apart. So one time when I was a wee tot on my way to Kanakuk, I bought a puzzle at a Cracker Barrel.

We are checking out and the man solves it right in front of me!!!! It was the rudest thing of all time. That’s like renting a movie and having the guy tell you the ending. Needless to say I still have some unresolved issues with that Cracker Barrel employee.

This part of the journey has been ‘interesting things on the side of the road’.

I’ve seen the Biggest Gift Shop Ever and the Largest Selection of Jigsaw Puzzles. Both looked like real profitable institutions. Missouri should really be called the The Factory Outlet of Unnecessary Items State, it just seems fitting.

My mom and I brought Harry Potter movies to watch on the ‘DVD’ player. Except my dad grabbed the tiny netbook computer without a place to put in a cd. And I forgot my computer charger.

We stopped just a second ago to go to the bathroom and it was raining. I absolutely loath getting rained on. So I run into the gas station and I sort of make a scene as I burst through the doors. But standing there in front of me was a man that looked exactly like Kevin Richardson, the missing Backstreet Boy from the concert last week.

We are getting tired of being in the car and by car I do mean three across in a Uhaul.

Well since my last update I have napped and seen the sights of the road. We made it through St. Louis and I saw this!

While I would like to take credit for that photo, I cannot. I was all prepared for photo greatness and I took this. 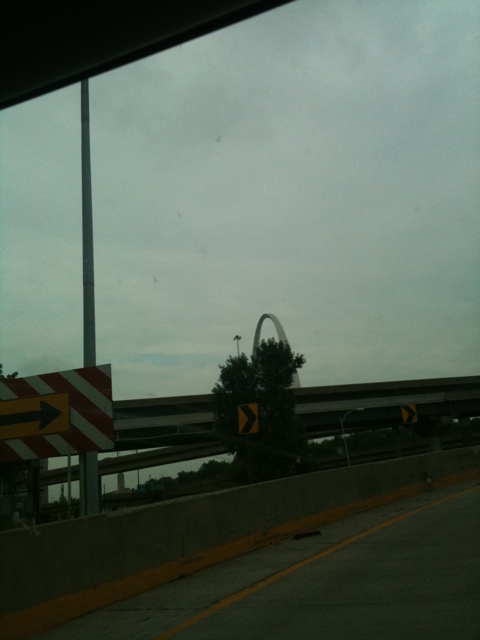 Less than thrilling, I know. I got all fussy and took another terrible picture and the said this, “Eff you The Arch, eff you.” I didn’t actually utter curse words, my parents are here for goodness sake! But my dad thankfully snatched one great shot of the arch.

The first time I ever went to St. Louis I was baffled to discover that the arch isn’t white. It photographs white. But that is only because the steel, which is silver in color, reflects the sun and then shows up in pictures as white.

Now we are driving through the rest of Missouri and on into Illinois. There is a lot of corn. A LOT. It goes on for miles and miles. And that got me thinking about crop circles. I have no desire to ever participate in crop circle making. Mainly because I’m not trying to lure aliens to Earth, but also because it seems extremely difficult.

Nothing extremely hilarious is happening. Car riding is much less humorous than I had initially imagined. We don’t have much further for today. And hopefully we are going to see a movie when we stop.

I keep waiting for hobbits to pop out of the corn fields. Or children of the corn.

We have stopped for the night. I’m in Springfield, Il. It’s my second Springfield for the day. We are about 3 hours away from Chicago. I don’t think anything too crazy happened. Aside from the fact that when we got to the hotel and I got my bag out of the back, the torrential downpour we had been driving in had absorbed into my nice Vera Bradley bag and got all of my clothes wet and caused me to use a runon sentence. So that was great.

This concludes Comedy Day. I hope that you enjoyed my updates. And I hope you laughed at least one half of a time.

Wish I could apparate to my apartment.

A thing I love.

It’s Lipstick Day and I love lipstick. I went to Tulsa today and I headed to my most favorite make-up counter, MAC. MAC has this great program that let’s you get a free lipstick if you recycle 6 empty make-up containers. Well, I’ve had these empty containers sitting around for ages and ages.

So, I’m there, looking at lipsticks and I am having the hardest time deciding which one to get. Well, I finally settled upon a lipstick called Rebel. It’s kind of purpley pink. I also got a lip gloss called Pink Lemonade. They look very pretty together. I’m very pleased with my one free lipstick and my purchased gloss.

I have always loved lipstick and lip gloss. Currently, I have 4 different lipsticks in my purse and that’s only in my purse. It’s sort of a bad habit. I’m sure that the statistic that women eat an average of 7 pounds of lipstick in their lifetime is shattered by me. I am probably up to 7 pounds and I’m only almost 22. I mean I’m not saying I should be on that show Freaky Eaters, but I’m not saying I won’t be there in 30 years.

I also found some cute things to wear to work. I purchased the most lovely yellow dress. I love yellow, it’s my most favorite color. I can’t wait to show you all pictures of my new apartment and all the yellowness that will reside within it’s walls.

I leave in the morning. I am packing my last boxes. They are mainly consisting of the last of my laundry and all of my bathroom things. I can’t believe that I am really moving there. I can’t wait until Sunday night, when I’m finally all settled in.

Are people from Chicago called Chicagoans? I mean it doesn’t really matter, I will claim Bartian forever. Mainly because Bartian is the greatest thing to be called, but partly because I love Bartlesville and always will.

Tomorrow is Comedy Day, which is fitting because I’ll be in a Uhaul, riding on a jumpseat in the middle of my parents. It’s going to rule.

MAC, I’m not sponsored by you either, but feel free to put me on the payroll.

PS: Apple Computers has more money on hand than the US government. Spooky.

PPS: Brian Williams was on Jimmy Fallon tonight. They were talking about the debt crisis and the fact that Apple has more money than the US. Brian Williams comments, “Well, they make way cooler stuff.” And that’s why I love Brian Williams.